Special issue: The evolution of permafrost in mountain regions 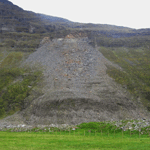 Abstract. On 26 June 2008, a rock avalanche detached in the northeast facing slope of Polvartinden, a high-alpine mountain in Signaldalen, northern Norway. Here, we report on the observed and modelled past and present near-surface temperature regime close to the failure zone, as well as on a subsequent simulation of the subsurface temperature regime, and on initial geomechanical mapping based on laser scanning. The volume of the rock avalanche was estimated to be approximately 500 000 m3. The depth to the actual failure surface was found to range from 40 m at the back of the failure zone to 0 m at its toe. Visible in situ ice was observed in the failure zone just after the rock avalanche. Between September 2009 and August 2013, ground surface temperatures were measured with miniature temperature data loggers at 14 different localities, close to the original failure zone along the northern ridge of Polvartinden and on the valley floor. The results from these measurements and from a basic three-dimensional heat conduction model suggest that the lower altitudinal limit of permafrost at present is at 600–650 m a.s.l., which corresponds to the upper limit of the failure zone. A coupling of our in situ data with regional climate data since 1958 suggests a general gradual warming and that the period with highest mean near surface temperatures on record ended four months before the Signaldalen rock avalanche detached. A comparison with a transient permafrost model run at 10 m depth, representative for areas where snow accumulates, strengthen these findings, which are also in congruence with measurements in nearby permafrost boreholes. It is likely that permafrost in and near the failure zone is presently subject to degradation. This degradation, in combination with the extreme warm year antecedent to the rock failure, is seen to have played an important role in the detaching of the Signaldalen rock avalanche.