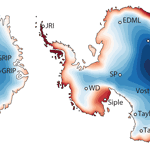 Abstract. Commonly, three mechanisms of firn air transport are distinguished: molecular diffusion, advection, and near-surface convective mixing. Here we identify and describe a fourth mechanism, namely dispersion driven by synoptic-scale surface pressure variability (or barometric pumping). We use published gas chromatography experiments on firn samples to derive the along-flow dispersivity of firn, and combine this dispersivity with a dynamical air pressure propagation model forced by surface air pressure time series to estimate the magnitude of dispersive mixing in the firn. We show that dispersion dominates mixing within the firn lock-in zone. Trace gas concentrations measured in firn air samples from various polar sites confirm that dispersive mixing occurs. Including dispersive mixing in a firn air transport model suggests that our theoretical estimates have the correct order of magnitude, yet may overestimate the true dispersion. We further show that strong barometric pumping, such as at the Law Dome site, may reduce the gravitational enrichment of δ15N–N2 and other tracers below gravitational equilibrium, questioning the traditional definition of the lock-in depth as the depth where δ15N enrichment ceases. Last, we propose that 86Kr excess may act as a proxy for past synoptic activity (or paleo-storminess) at the site.